[resumen.cl] A group of Mapuche families (of the Pehuenche group) in the Infiernillo area of ‘Trapa Trapa’, Alto Biobío district, is facing an eviction threat. Following a lawsuit filed by a business owner against two community members, the land was transferred to a company called TAMA S.A., which is currently pushing forward the eviction order. In conversation with Resumen, spokesperson Gabriel Kürruman Huenteman stated that his community is living on the land that has historically belonged to them, and that their position is that they will not be leaving it.

The Mapuche-Pehuenche communities bordering on the slopes of the Andes in the Biobío Region, Chile, have suffered from the historical usurpation of their land by the Chilean and Argentine states. In the late 19th century, as the armies of both states persecuted the Peheunche and forced them to seek refuge in the highlands, the Chilean state began to conquer Alto Biobío with settlers, most of them poor peasants from the Biobío area, who, motivated by economic need, relied on fraud, a favourable legal system, and the support of the authorities to gain possession of the best agricultural lands.

In the early 21st century, various Pehuenche communities embarked on territorial recovery processes in the Queuco River Valley in order to live on the land that had been taken from them by force, most of it located in the areas nearest the river.

You can also read: Woman shot in police operation in Mapuche community

In a public communiqué, the Pehuenche families of Infiernillo Trapa Trapa, in the Queuco River Valley, stated that they had been served an eviction order on 1 August. The eviction action was brought by Inversiones TAMA S.A. and granted by the District Court of Santa Bárbara. In their communiqué, the Pehuenche state that their family ‘are living in uncertainty, and could be evicted at any time, endangering the safety of children, older adults, and families living on the territory’. 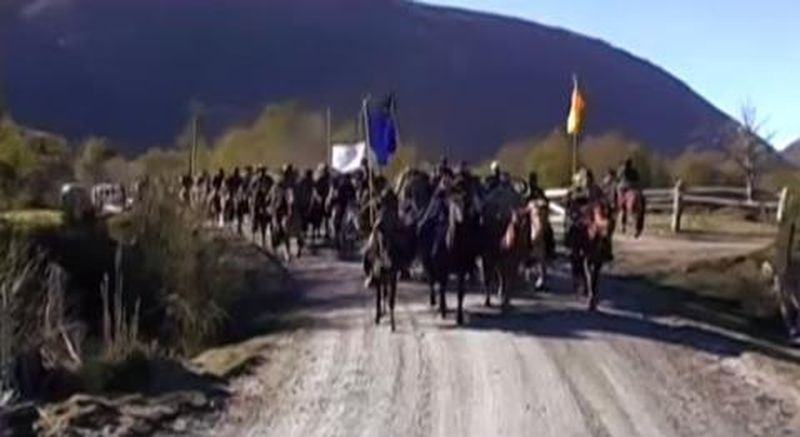 They stated in their communiqué that, 'in 2002, our family, particularly Atilio Pereira Huenteman and José Jaime Marihuan Huenteman, were summoned to appear in the Santa Bárbara court. There, both were told that criminal trespass charges had been laid by Raúl Pérez Serani (alleged owner). Over time, both community members began using the legal system to confront Raúl Pérez Serani. However, the court did not find in favour of Atilio Pereira and José Marihuan, and convicted them of criminal trespass in 2006. That very year, Raúl Pérez Serán told the territory to Inversiones TAMA S.A., who are currently pressing criminal charges against the families who have always lived in this space.'

According to the newspaper La Tribuna, the lack of police personnel in Santa Barbára has prevented the execution of the court order. For its part, the mayor of the district of Alto Biobío, Nivaldo Piñaleo, in a statement to the web Biobiochile, asked the private parties not to insist on an eviction in order to A group of Mapuche families (of the Pehuenche group) in the Infiernillo area of ‘Trapa Trapa’, Alto Biobío district, is facing an eviction threat. Following a lawsuit filed by a business owner against two com. Piñaleo additionally emphasised that 'all of these territories are Pehuenche land; the people are occupying their territory.'

In conversation with Resumen, Gabriel Kürruman Huenteman Pereira, a member of the families inhabiting the Trapa Trapa Infiernillo area of Alto Biobío discussed the situation they are facing.

Asked to discuss the general context of the usurpation of Pehuenche land, Gabriel noted that the process of militarisation and usurpation by groups of private parties, including Farías, Anguita, Esquerré, Bunster, Campagna, and others. 'This process of occupation, genocide, and militarisation of the Wallmapu directly affected our people in Alto Biobío (...). The state itself used legal instruments to aid these families in establishing themselves on the territory; these legal documents utterly ignore historical memory and the use of the land by our communities. Our grandparents faced this situation, and now we are facing the consequences,' said Gabriel.

With regard to the role of the Corporación Nacional de Desarrollo Indígena (CONADI - Chilean indigenous affairs authority), Gabriel noted that 'we have come to the conclusion that CONADI takes a paternalistic approach to solving the Mapuche issue using projects and welfare measures; as such, they have not provided assistance on the issue of land ownership.' He notes that, being an institution of the state and a tool of the government, 'there are also interests in repression on the part of those who criminalise the Mapuche people and support the people who have usurped our Mapuche territory.'

«The stolen lands will be recovered» Alto Biobío sing with Guñelve star and Wenufoye or «Mapuche flag» | Resumen.cl

Referring to other threats faced by the Mapuche-Pehuenche population of Queuco and Alto Biobío, Gabriel explained that, historically, this population has been exposed to unfavourable situations, to poverty, injustice, insecurity, policies favouring private land acquisition, the introduction of power generation as a for-profit business, hydroelectric stations, and other issues. Gabriel noted that they currently face a constant threat 'given the state repression of the communities carrying out territorial reconstruction processes.'

Gabriel noted that the area of Infiernillo affected by this eviction order is inhabited by 15 families. 'Each family is quite large, with children, older adults, newborns, as well as people with disabilities; we are a diverse and united group of families living there.' Their main activity is ‘livestock, cattle, quinoa, agriculture, and gathering.'

Mapuche families in Alto Biobío respond to eviction order: ‘We will not leave the territory’